That was a little bit of a strange storm. The predictions seemed to hold so much promise, but I guess we can't complain: it did snow somewhere between about 5" to 12" up in the mountains. Unfortunately, it was more in the 5" to 6" range. But, all things considering, the trails look pretty good and should ski well once we get them all groomed out to the finish product.

It did snow somewhere between 5" and 6", but the problem is that the front hill and just beyond where the ground was bare did not keep the full 6" of snow and so the rocks are still lying just beneath the snow. Otherwise, the rest of the trails looked great with the new snow on top.
Tonight, I went up and ran the "blades" to smooth and even things out after all those weeks with no snow and intermittent spring temps mixed in with the short bursts of arctic cold. What a weird year. Anyway, the trails needed to be leveled out quite a bit, as they were getting very bumpy and uneven. Everything got several passes, but I didn't get the final grooming completed with the groomer and track setter. That may get accomplished either tomorrow and/or Thursday.
For now, the trails are a little soft but bladed, so they'll ski well with either skate or classical skis (just no track). I still suggest walking up from the half-way point on the front hill to about 250 meters or so past point A. Even that hill below point A to the lower road is too thin to ski now. The cutoff from B to R got a pass, so it's possible to loop from the lower road to the upper trail there. Other cutoffs were packed as well.
The meadows had drifted a bit with the wind, and it began to blow again while I was up there, so there may be some drifts here and there again tomorrow, but probably won't be too bad.
Some pictures for your viewing pleasure: 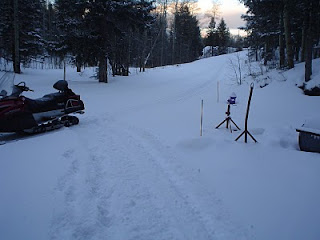 just gettin' started at the base on Camp May Road 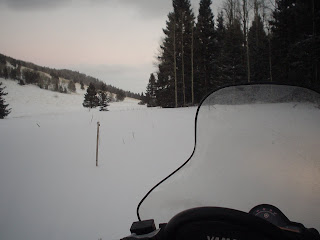 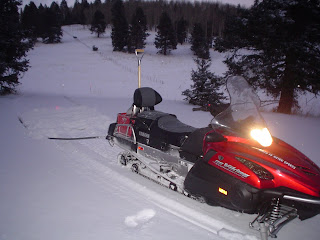 The mighty "Viking" pulling the "blades" to smooth things out 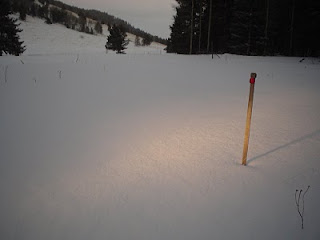 New snow at one of our reflector wands 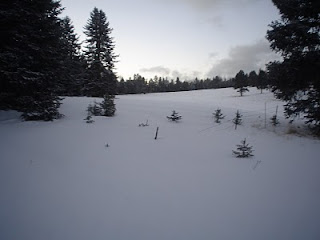 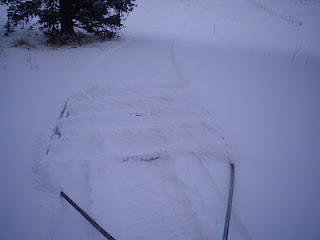 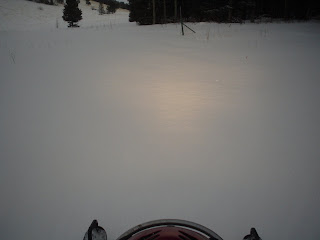 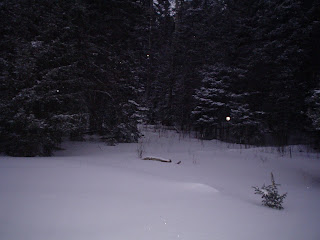 This has nothing to do with grooming, but just makes a nice picture 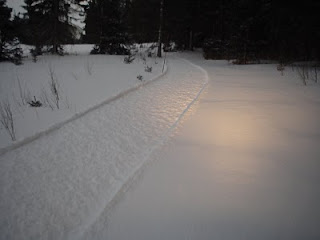 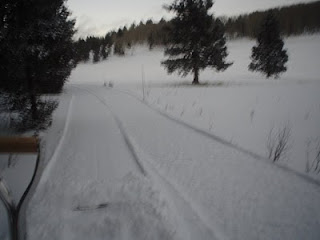 A blurry picture, but you can see the "smoothing" effect of the bladed groomer 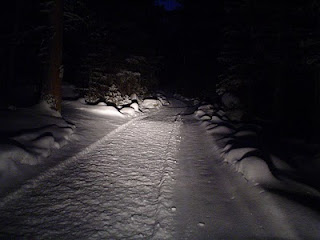 ...and my personal favorite. Frosty night grooming offers a different landscape than what we experience while skiing during the day.

Not only does he groom it, but he shoots it too!

Hi! Thank you for sharing your thoughts about ski report in your area. I am glad to stop by your site and know more about ski report. Keep it up! This is a good read. You have such an interesting and informative page. I will be looking forward to visit your page again and for your other posts as well.
In our previous lives, we built sophisticated web sites for companies. We love building web sites. We love our dogs. We are dorks. Our closest friends are imaginary. We also love skiing and snowboarding. By combining two of our passions, we have put together the ultimate ski reporting web site. Imagine if King Kong and Godzilla had a child. That's what we want SkiReports.com to be.
Ski Report Utah