Well, the fat lady has finished her warm-up and is in a crescendo for the final aria of the season.

Despite (fairly accurate) predictions for a warmer and drier winter, we ended up having a halfway decent season.  It was very warm, but we got lucky with some of those storms that bulged far enough south and circled around enough to give us some very-much-needed snow.

Unfortunately, it was also warm pretty much all winter...and FAR TOO WINDY!  As such, it was always a challenge to stay on top of the grooming and tree clearing, then it would get too sunny and warm...and repeat.  What a challenge.

All in all, we did manage to get some good days of skiing, and as we speak, the upper meadow and portions of the upper tree trails are still quite skiable with some nice stretches.  But, there are now some open, bare patches that are growing by the day.  So, we're pulling the plug on any more grooming.  Also, lots of trees came down last week, so that is a mess still.  The lower road is still blocked by some of the carnage: 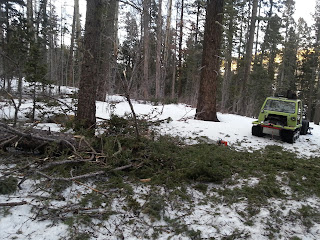 Thanks to all of you who helped in some way this year.  It's a huge effort, but we have great members and now, a lot of kids who are progressing and learning to be lifetime skiers and good citizens. 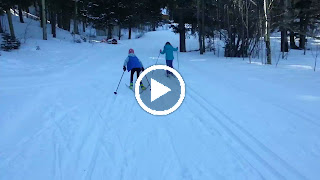 Posted by Clay Moseley at 4:49 PM 3 comments: Links to this post

From our club  member Paul Gooris: 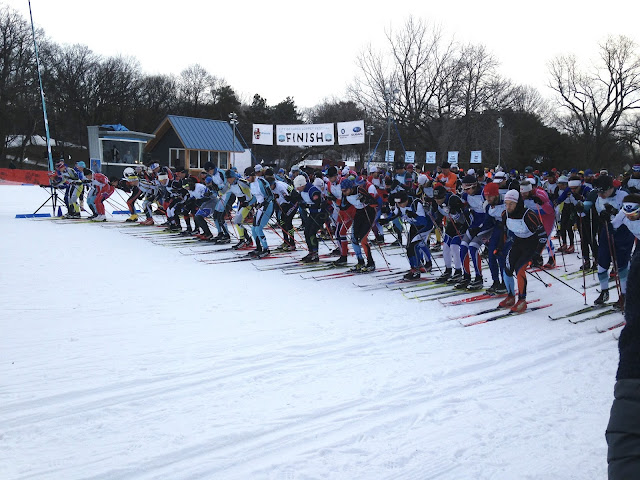 Just finished the Puoli Classic ("half marathon") at the City of Lakes Loppet in Minneapolis.  This year, City of Lakes hosted the AXCS Masters National Championships; next year they host the World Master Championships.  Being a dedicated mid-packer, the podium, let alone age group accolades are not on my ticket.  But it was fun to ski in such a large event (152 skiers in the Puoli), and meet skiers from across the country of all ages and abilities. 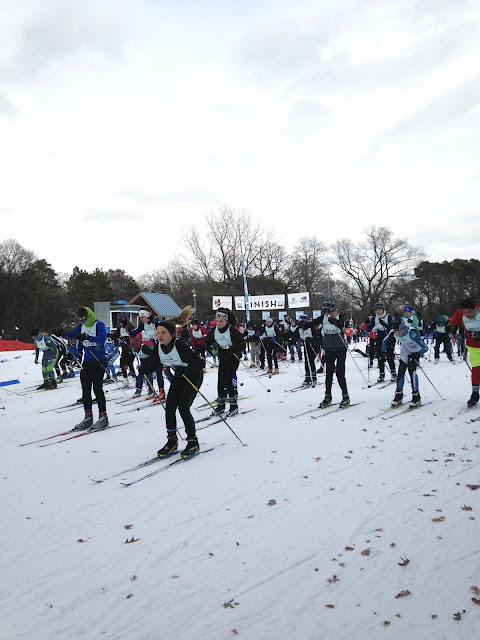 In addition to the marathon and half marathon, there was a ski tour, skijoring events, crew ski (awarded to the leading fund raisers for the CoL Foundation, this a 50 meter dash with teams of 6 skiing together on 20 foot long skis), and youth age group races (see photos).

And those are just the events I saw on Saturday; other events were held on Friday and Sunday.  Think of the crowds that attend local road marathons or the NM State Cross Country meet, and you'll have an idea of Nordic's following in the upper Midwest. 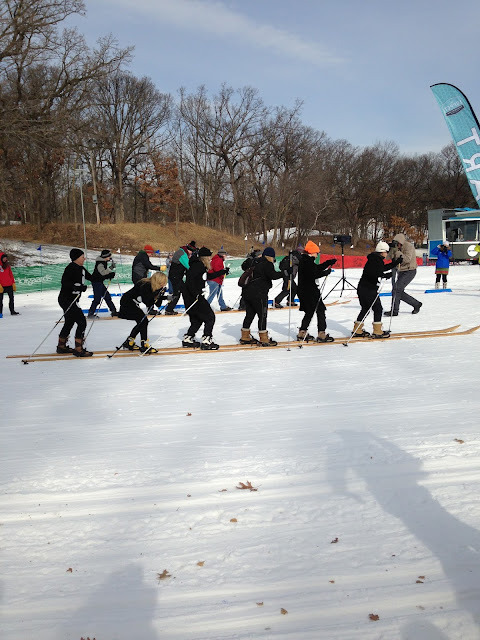 Matt Liebch (?sp), former Birkie winner, won the marathon race in roughly 1 hour, 15 minutes. That may seem like an extraordinarily fast time...but this brings me to the more serious and concerning part of my report.  The City of Lakes marathon and half marathon are traditionally point-to-point races that start in Theodore Wirth Park and end in downtown Minneapolis, being 42K and 21K respectively. This year, however, there has been very little snow in the Minneapolis area.  The courses had to be changed and confined to loops of mostly man-made snow within the Theo Wirth Park itself.   The marathon was 30-32K (so Matt's time is still screaming), and the half was 14-15K. 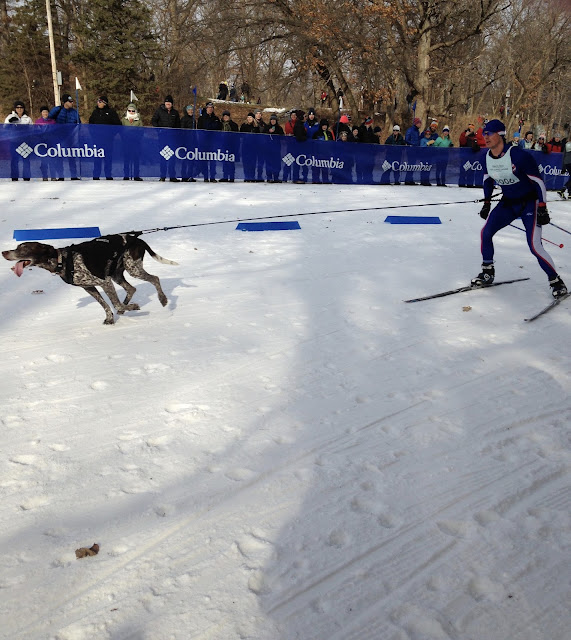 Lack of snow has been a problem for several years, to the point where the City of Lakes Loppet Foundation has invested heavily in snowmaking.  Across the board, skiers were commenting on the shortage, and those from out-of-area, like myself, found it weird to think that there was more snow at home than in Minnesota. 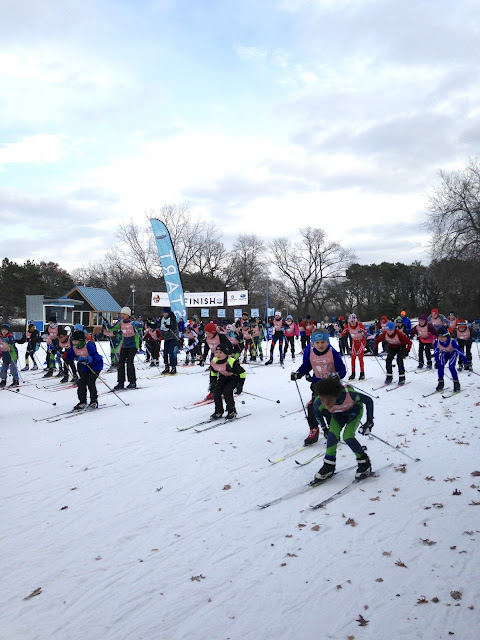 While perusing the vendors and exhibits in the "big tent", I met a group that is trying to draw attention to our changing winters. Regardless of the cause, climate change is happening, and it is having an adverse impact on our sport as well as the rest of our lives.  If you are interested, check out Cool Planet Skiers at coolplanetskiers.org. Their motto: Saving Winter for Future Generations.

Finally!  The trails are completely groomed, with track set and the meadow all cleaned up.  It was a LOT of work, but a big thanks to everyone who went out to pack the edges and hills, etc.  That REALLY helped.

We were even able to add the additional 1km extension to the end of the meadow at the Caldera rim.  It's really nice.

Posted by Clay Moseley at 10:50 AM No comments: Links to this post

I haven't had a lot of time to keep the blog up to date with conditions, but I'll try to add some quick info more often.

As of today, we have a great base of snow, but with a lack of consistent grooming volunteers, it is not being groomed regularly.  That being said, we did get it bladed with a very soft track set on Tuesday night, then Dave Wykoff ran a pass with the roller yesterday morning, and today, Chuck Calef will be making some more passes with the "blade" groomer to go cut down the top crust and smooth things out after the 21" storm last weekend.

It's supposed to snow overnight, so I will try to get up there in the morning to run the roller and see what things look like.  No guarantees that it'll be firm, so be ready for some good classical touring if it's still very soft.

We're still experiencing an inordinate amount of tree-fall.  It's taking away from our ability to dedicate time to the grooming.  Apologies for that.  Hopefully it subsides and we can get back to keeping the skiing in good shape!

Here's a picture of our new roller/compactor from YTS: 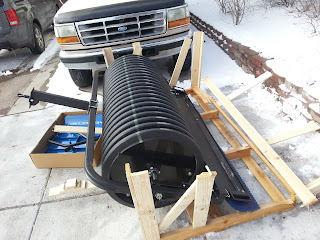 Posted by Clay Moseley at 11:53 AM No comments: Links to this post