I got up to the trails to ski just after noon today.  As usual, I ran the first parts through the burn / south-facing stuff, put the boots and skis on at Point B (the new one, closer to Point C), then was able to ski continuously up the upper tree trails, back down to Pt-M, and back into the trees.

At Pt-B, it's thin with some spots here and there, but not too bad.  The conditions generally range from "poor" to "good," depending on the stretch.  There are six bad spots, but I was able to pole through all of them, most of which are only a few feet long.  The "Rock" section is sketchy and I actually made it through on just one ski touching the snow.  There are also a few of the icy/dirty spots, but they're not long and easily passed through.  Otherwise, most of the skiing is surprisingly nice.

It hasn't been groomed, so it is what it is.  I thought it was pretty good stuff, considering.  The far upper part of the trail and inner meadow down to M is actually nice with some soft new snow still on top.

Here are two pictures.  The first one is at the lowest part of the "snow zone" at Pt-B, and the second one is the top of the meadow at the Caldera Fence.  Everything looks about like this, with some +/- sections throughout.

It would take only a modest storm, or even some easy shoveling in those 5 or 6 rough spots to really improve things.

I forgot to mention that I did leave two sleds at the rock (but need to leave a shovel with them) to haul snow to the thin spots.  It really works -- we need an "adopt-a-bare-spot" program!  I'll take care of the section around the Rock myself... =)

Be careful if you do get out, but generally, it's nice where it's nice and I think it's still worth the trip up.  Plus, I've been able to stay in uphill/downhill jogging shape!

Posted by Clay Moseley at 4:33 PM No comments: Links to this post

re: some photos courtesy of Rich Besser 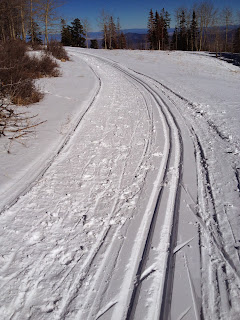 Posted by Ron at 9:49 AM No comments: Links to this post

Hi Sandia Peak Skiers,
This morning I groomed and set a classical track on all trails on the map attached.  Around 5 inches of powder and cold snow.  Great skiing up there so have fun.   If you enjoy the tracks and like the grooming, please consider donating a small amount to the UNM Ski Team on www.unmskiteamfanclub.com
I have received one very generous donation so far and I am in the process of ordering some grooming equipment that will make the trails even better.  I also put up some signs so maybe a couple of people will walk on the side, instead of right in the track.
I will post updates on my grooming on the University of New Mexico Facebook site in the future.  Today’s grooming will be the last for a while.  I am taking the team to Utah and Montana in early January and I will not be back until the 19th.  After that we will put in some hours again to get the trails better.  The best way you can help to make the grooming easier for me when I get back is to shovel snow from the upper side to the lower side of the trail.
Merry Christmas and a Happy New Year.
Fredrik Landstedt
Head Coach UNM Ski Team
landsted@unm.edu"

see map below for trails groomed:

(to get to the groomed trails either take the Sandia Peak tram to the top and enter on the tram service road (sw corner of loop) or take the crest hwy to either the 10K  or Ellis
trailhead. 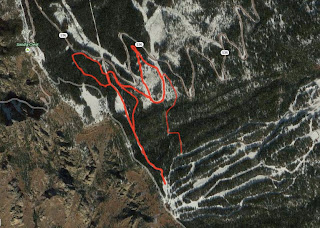 Posted by Ron at 7:27 PM No comments: Links to this post

We had some new guys volunteer up for grooming, so last night we went out for grooming lessons.  I forget how tough it can be at first, but all of them seemed to catch on pretty well, and actually enjoy it...I think.

Probably to their dismay, they were also wrangled into doing a little bit of shoveling in a few very thin spots.  The weather isn't cooperating very well, so a few short sections (all on the skiable loop above the burn) of the trail have taken a beating this week.  So, we shoveled quite a bit in those short sections, mostly around the "Rock."

While it is not a very pretty "groom" job, parts are still probably pretty nice.  We have maybe one more week of decent skiing if it doesn't snow.  If it doesn't snow, then it'll be back to rock-bottom, even on the upper loop.  Lots of the classic track got wiped out, so don't expect much there if you go classic ski.

Of course, the burn area is full of bare ground, so you'll have to hike through all that until past point "B" or so.  The lower road is only skiable past the burn (past that big hill), and then only to about Point "O".  The steep "bypass trail" from Pt. "O" to the lower meadow is barely skiable, and then that only dumps you out to the cooked-out lower meadow.  I suggest skiing back and forth on the skiable part of the lower road, then taking the "Clay's Cut-off" trail back up to the upper trail.  There is also skiable trail from Pt. "O" to "F," which is the end of the lower road up to the switchback on TJ's.

Get it while it lasts, and pray for snow!

Clay
Posted by Clay Moseley at 10:55 AM No comments: Links to this post

Fredrik (UNM) groomed quite a long loop up near Ellis and 10K.  Primarily groomed for classic but skatable in sections.  We still need help on some sections of trails with shoveling.

Ron
Posted by Ron at 10:06 PM No comments: Links to this post

UNM has groomed the tram service rd. & the UNM loops for classic skiing.  The road is skatable.

Ron
Posted by Ron at 5:08 PM No comments: Links to this post

Fredrik intends to groom again on Monday.  Again need help shoveling to level trails for grooming. So far haven't had any.  Fredrik will be encouraged to maintain better trails if he can get help, both trail work and  monetary wise; so please help or donate at www.unmskiteamfanclub.com web site if you're interested in better grooming at Sandia. Fredrik has to transport his equipment all the way up the mountain from UNM each time he grooms since USFS and Sandia Peak aren't willing to let UNM have a safe place (any place actually) to keep a snow machine up there ( there is dismal lack of support from Cibola National Forest for nordic skiing).

Ron
Posted by Ron at 9:49 PM No comments: Links to this post

Fredrik groomed the service road and the UNM loops Tuesday Dec 2 and now we have additional several inches, very cold.
Posted by Ron at 10:10 AM No comments: Links to this post