Hi All,
Today was the relay day. The night was cold again, but it was foggy and the snow glazed very fast in the morning. The first starts were at 10am, but women started only at 11:40am. By that time the tracks were already very shiny, so glide was no problem. I actually had the best gilde I've had here so far. But that was also partially due to that I nailed the kickwax now, thanks to Clay's Power Grip, and had less kickwax I've ever had in a race. The course was fairly flat too, which allowed little kick. Had to run the little knolls next to the track, but I think it was a good choice in this race.
The relay format was 4x5km. First two legs classic and last two free style. The classic loop was the beginning of the 15km race course and the skating loop the last 5km of the same course. The skaters had all the hills. I skied the first leg in the youngest women agegroup. To get enough teams the age categories for women were now groupped in 10-year increments, and we were a total of six teams in my age group: Russia, Canada, France, Finland, Italy and USA.
We started together with the second youngest age group and there were some 15 teams lined up. I had a bad start. Somehow my lane was very sticky and I did not get going that fast. In the first turn some 50m to the course before the first downhill there was some pushing going on and one racer literally forced me out of the track by changing lane on my skies. Anyway, we got going and no-one fell. I managed to pass a few teams in the first little knoll. Had a good glide in the downhill and when the double-poling sections started I passed more teams. There was the russian team in front of me but she slid and fell in the next little uphill. Nevertheless after a while she had passed a few teams and I tried to not let the distance increase too much. I was skiing behind a Finnish team from the other age group. The lady in their team had been about 4 min faster than me in the 10km race and I just tried to keep up. Then came the gradual up hill and I was able to pass her with kick-double-poling. In the last curve before last uphill I did a small lining mistake and there she passed me again and came to finish 5 seconds before. But I was quite happy that I didn't loose any more. In our own agen group I was third, 30s behind Russia and 19s behind Canada. Marie skied our second leg, and she had too hard wax as the tracks changes so much even during my leg. So, she was slipping in the uphills and had to double-pole some hills where striding would have been a lot faster. But she did well in any case. Passed Canada, but had to let France and Italy pass her. Beth skied the first skating leg and did such a good job that she passed Italy right in teh beginning and France in the last long uphill. Russia had already gone along ago, but the time difference between second and fourth team was less that 45s and Finland was catching everyone up with their very strong skaters. Inge skied our last leg and was some 5-10 s ahead of France until the last long uphill. The French skier caught some time on her in the downhills, but she was able to pull way a bit in the uphills. Finland was flying behind and visibly catching everyone. The victory went to Russia with a clear gap, but after that it was exciting. In the last uphill Inge pulled away from France, but Finland was still getting closer. In the end, Inge finished second, but Finland passed France in the finish line and got third.
So, it was awards tonight again. Other US teams did well too. We got silver in the oldest women's age group and at least one male team got a medal.
Tomorrow is long distace free style race, and I have a rest day. Will be out there cheering Paul on his record long ski ever. 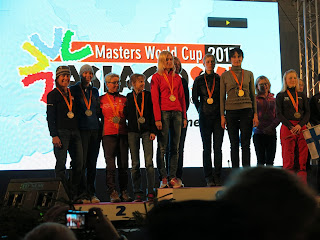