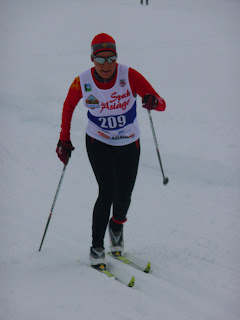 Today we had the 15km classic. It was very moist and started snowing right before my start. Struggled a bit with the wax. Had Rex power grip under covered by SkiGo red, but needed something softer for the glazed parts. Layered with SkiGo yellow, but that froze. Went back to SkiGo red and called it good. It worked well in uphills that were not glazed, but kick-double-pole did not really work that well as the tracks were really icy and wet at flat parts. But it did not freeze either, so I should be quite happy. 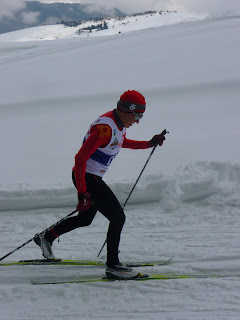 The start went well I was second off the stadium thanks to double poling. Then I struggled with technique for a while and the russian F1s passed. I skied a long time behind a canadian F1. She had a bit better kick and went the uphills better, I caught her on the flats with double-poling. At half way I got the breathing trouble a little again and struggled for a while. In the last long downhill it eased up a bit, but the canadian was then gone and I was alone. I really enjoyed the long gradual final climb, but then got the breathing trouble again and could not hammer the last steeper uphill as well as I would have wanted. Managed to ski it up in any case and do the planned kick-double-pole to the finish. Was 3min 56s behind the F1 winner, but 58s ahead the second F2.

So, it was awards tonight. The ceremony was actually quite grand in Italian style, and the awards were given by a former Italian team member, whose name I just forgot. Clay would probably know his name. It was familiar to me too. Will tell you if it pops up. Got a big heavy medal and a bottle of dry, strong champagne. It may end up with Liza when she comes to visit.
Here are some pictures from today. My posture was still a bit too far back as one can clearly see from the photo and the skiing wasn't light.