Posting contents of Sanna's emails as they come in. Sanna S and Paul P are SWNSC club members representing us at this awesome event [personal comment from me - we are SO bummed not to be able to make it to this MWC. Italians really know how to put on great events...of course! :) Well, maybe Finland MWC 2015 will work out for us.] Btw, if you click the photos you can see them larger. 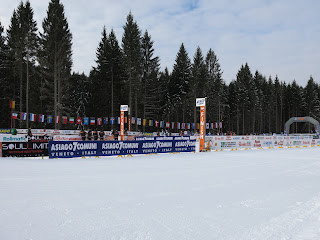 Had a first ski round on the race course today. It's a fairly easy course with a flat start and some really nice hills, both up and down, in the end. Finishing is uphill. The Russians are all over everywhere, we met some Australians and saw a few Americans, but as I don't really know any of them and they don't know me, didn't talk with anyone yet.
It snowed here on Mon-Tue a good 1-2ft. So, the snow is really nice and plenty. Weather is now sunny and the trails were starting to glaze already today. Had a little trouble with kickwax as Swix white was freezing in the shady spots but not kicking in the sunny. It worked well until noon though, which should be the time my races finish in any case. The new snow is surprisingly dry, but if the sun keeps shining, it may be klister in any case.
Bought a new pair of classic skis too and might even race with them. They have felt very easy to ski. We'll have a ski testing day tomorrow, and I'll test a few different kick waxing scenarios. Then on Sat it is Paul's first race and on Sun mine. 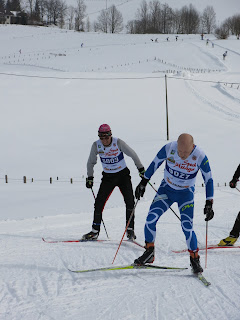 Today was the first race day. Paul did his second ever 30km ski (he's never done anything longer either), and was going very well. His time was 2h and 3min, and he said he could have done one more lap on the 15km course. Looks good for the long distance.
I was the support team with feeds and cheering. Stood in one corner and cheered for everyone. It was very touching how many thanked for cheering when passing.
Here attached a few pictures from the race (Paul is #6003) and opening ceremony. They had the local ice hockey team bring in the flags and local ice skaters then performed little programs. I was very happy that they included also the very youngest in the show. And, then there were a lot of speeches, of course, and one welcome by Bjorn Daehlie. He was supposed to race today, but I did not spot him and the announcers did not highlight, so I assume, maybe he did not. 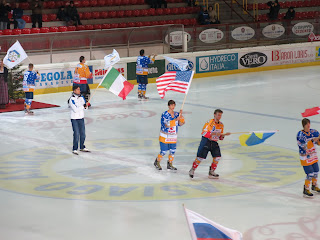 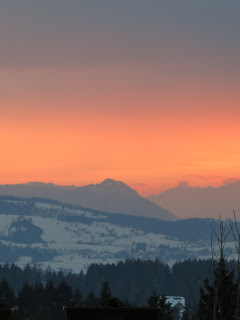 Tomorrow is my race. It starts late and the weather has a chance of turning tricky for waxing with drizzle or new snow. So far the Power Grip has been great, but have to see tomorrow what happens.


We have been enjoying the time here very much. The food is good. Paul's cooking is as good as always, and it is easy to get local fresh ingredients. Before the races we went up to the mountains to ski. It was very beautiful, and hopefully we'll be able to make a trip there on the rest day again. Don't have any pictures from there yet, as I did not bring my camera.
Italians are very friendly and I was really impressed how the spectators forced people out from the ski trail while the race was going on. During races  no-one should be skiing there, but of course people go to "cool down" etc. But even the toughest, ignorant and deaf-playing guys could not stay with all the boo-ing.
The sunsets are also almost as beautiful as in New Mexico! The last picture is from our balcony while I was waxing skis tonight.