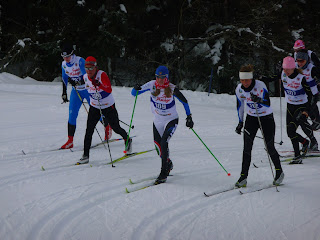 posting for Sanna
RACES 3&4:
Today we had the short distance races. 10km classic in the morning for me and 10km skating in the afternoon for Paul. The gap between the races was too short for us to return to accommodation, so we had a long day at the event center.
The night was cold and it snowed a little, which changed the tracks quite a bit and made it somewhat slower skiing than yesterday. I had the same Power Grip base, but now covered it with Rode blue. Had very good grip, even a little too much as I was left behind in the first down hill by some 15m by the russian younger ladies. The age groups go from 1 to 12 with 5 year increments 1 being 30-34 year-olds, and generally all age groups start separate, but F1 and F2 (F for female) categories are so small that we always start together even if we don't compete with each other.
I think I had a good start. There was a Finnish lady in my age group coming down the hill next to me, but then I did not see her again. Skied with a Norwegian F1 skier. She had slightly better glide than me, but now I did well in the kick-double-pole sections and uphills, and in the finish she was only 20m ahead. Overall the race went technically better than yesterday, and I could even speed up a little towards the end of the last uphill. The course was the same as in the 15km race excluding the last 5km, which contains all the nice hills. So,it was quite flat. No hard climbs, but no rest either. Finished first in my age group, fourth in my start and ~2.5 min behind the russians. 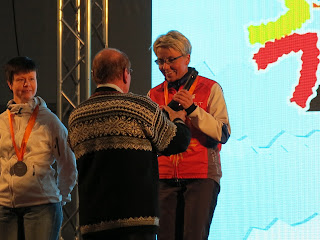 The award seremony was very similar to yesterdays. They showed again the Italian olympic relay win from Lillehammer on the big screen and now the awards were given by Silvio Fauner, the last leg skier in that big moment for Italians. Yesterday it was Giorgio Vanzetta. I did not get to shake hands with Silvio Fauner however, as he was saved for the skate races and classic race awards were given by some FIS representative.
The snow conditions changed completely for the skate race as the weather warmed up. It snowed slightly every now and then, but not enough to make any trouble for the glide. The trail glazed again and generally people had a very good glide. So much so that skiers with less balance and ability to maintain nice flat ski, had some trouble with slipping sideways. The fastest skaters did the 10km in 22 min! Paul did well too. He managed to push a bit harder and finished in 38min.
Tomorrow is a rest day and we plan on a trip to Campomulo, the near by mountain ski area.
Posted by Dinka at 12:38 PM