Well maybe not ever, but man this thing was one silly fun race. Here is the concept. Start at the ski lodge. Ski all the way up, 1200 feet vertical, to the top of the mountain. Next ski down one of the runs back to the lodge.

Making things a bit more complicated, there are two routes up the hill. One is longer, but smoother and more gradual, one is a straight up the slopes.

The idea is that the skate skiers will take the long way up while the backcountry/at/tele skiers will skin/run up the slope. In theory the skaters would be at a huge advantage up the hill, mitigated by the skinners taking the shortcut and further mitigated by the backcountry/tele/at skiers blasting down the slopes while the skaters nearly die. And damned if it did not work out really well.

The mighty pajarito mountain. Race started behind the jump and went way off the photo to the left, over the top and back down way over off the photo on the right side 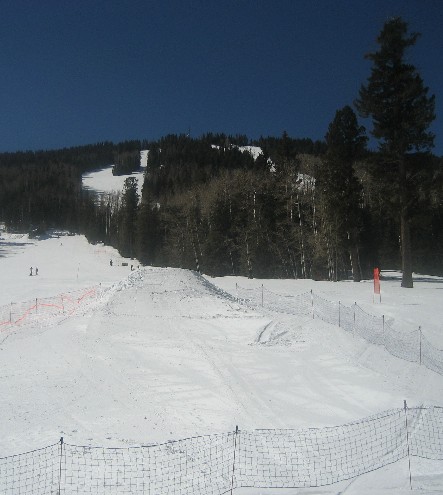 
For you locals, the race started just above the lodge (~9200ft) at the Pajarito Mountain Ski Area in los alamos and then headed south eastish up the access road all the way up to wrap around the back side of the hill and up and over the tip top (10440ft) and then down Rim Run to I DOn't Care to the jeep road back to the lodge. The shorcut was up Dogpatch.

Lots of the terrain and views are similar to the mountainbike bachelors party I had in October. photos here. With, you know, more snow.

Before we get to the race report formally, I just want to make a few things clear. I have been on skis on at a downhill area exactly once in my life in 1993 in vermont. I used to snowboard alot in Tahoe, but have not done that since 1999-2000. I am competent on skate skis on any downhill I have seen in a Nordic area. Pajarito Mountain is a pretty steep ski area. I have never been above 9400 feet at the downhill area when there was snow. You perhaps may understand why the downhill part caused disquietude for many of the skate skiers, including me.


JohnB all happy on his way to victory. Dig that crazy skate! 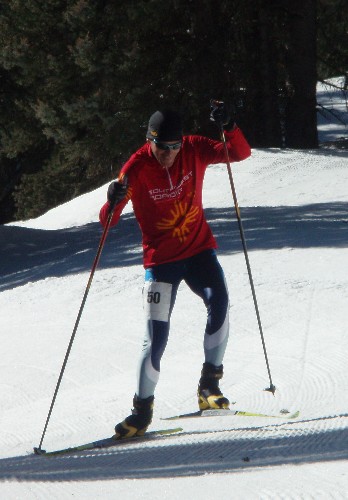 There were something like 15-20 skiers on the start line. About 8 skate skiers and the rest on some sort of backcountry/AT/tele gear. Lets call those other people skinners, even if it was not clear that all of them were actually using skins, but they did go up the shortcut.

To temporally distrub the narritive at this point, I want to add that I was asleep at 7:39am in my bed. I got up shortly thereafter and made it, dressed in my ski gear to sign in at 8:40 at the ski lodge. The race was scheduled for 9am start. Well done me. The morning? cold but clear and blessedly free of the accursed spring NM winds. 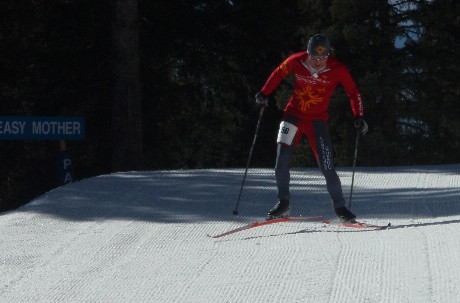 So there we are at the starting line and the race starts a bit late. Fellow SWnordic ski team members John and Ken get a great start and me and three other skaters start in the same area. The course starts with a bit of a downhill and then a sweeping right around some trees up to the climbing access road. Ken and John make it fine, but I follow (someLAwoman) on a bad line and we start skittering asunder on the off camber turn. Tom from Santa Fe makes it fine and I start the climb in fifth.

As we start to climb in earnest I feel pretty good and pass tom and (someLAwoman)and settle in just behind John and Ken who are setting the pace up front. The access road is well groomed but got seriously off camber at every crossing of the downhill runs. What started as a minor annoyance got to be very trying as the race progressed. 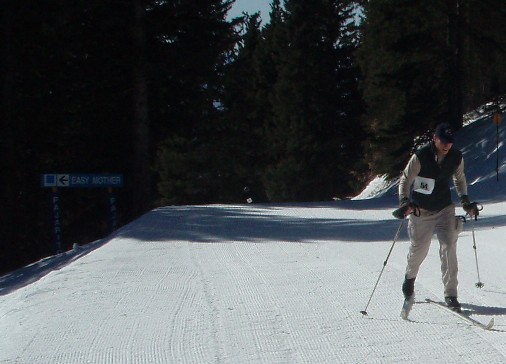 As we get a large part of the climb done and head toward the first big righthand switchback I find myself starting to blow up a bit. (someLAwoman) passes me right at the switchback and I see John and Ken up ahead starting to put some serious distance between me and them. As we cut back across the hill I can see that, to my surprise, there are two skinners up the mountain on dogpatch ahead of me and two just below me.
Well done fellers...


(someLAwoman)on her way to fifth overall. sorry I forgot her name... 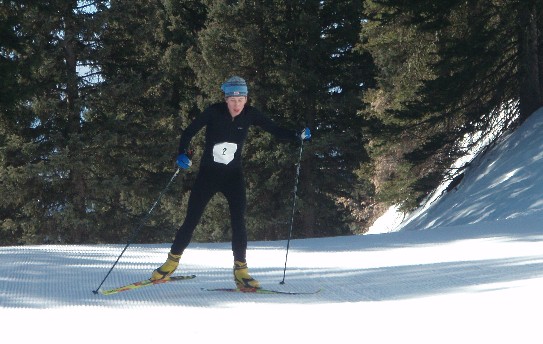 As the climb continues the suffering sets in. No big story to tell here. I am a bit overcooked. I am pretty sure my weight is the sum of the weights of John, Ken and (someLAwoman) and I am feeling every pound of this. Also it is really hard to recover at 10,000 feet when you are cooked. But I soldier on up across various injustices like icy off camber slopes and steep hills. There are some beautiful vistas from this part of the course, but I can't really remember them. I do remember when I did this climb on my single speed in the fall that there were easy parts of the climb. They do not make themselves obvious on skis. I am alternating between a weak V1 a weak coaches skate and some sort of stumbling herringbone run on some parts. Ouch. But yet I continue.

As we wrap around the back of the mountain I can see (someLAwoman) and two of the skinners up ahead. We finally hit a nice fast section before climbing back up to the top of the mountain. As we hit the last flattish bit I blow by the two skinners and find myself firmly in fourth ahead of all the skinners.

JessicaK is taking photos and cheering us on at this point, and taking photos. thanks Jess. So all photographs from the race are from her...

Me with the smile of terror as I know the descent is near. This is the hypoxic-swing-kick-dog-pee skate technique. No I will not teach you. 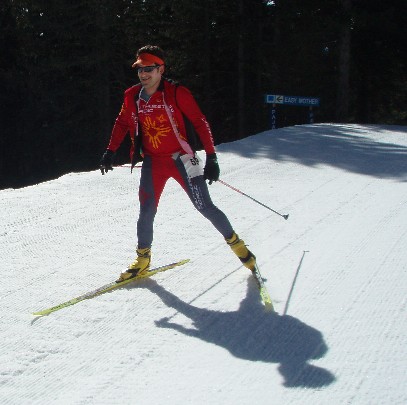 I pick up speed and head down the rim run knowing there is the small matter of getting down the hill. We come to the precipice of dooom at the top of the "I Don'tCare" run. I pause and look down. Maybe I pause for a while trying to plot out my path. It is a green run, but pretty steep. Especially for someone like me. I can see (someLAwoman) snowplowing her way down the slope well below me. As I consider my options, skinner #1 blows by me, without pausing and cuts some huge turns. Welp, I guess it is my turn.

I drop in and find I can mostly control myself by doing quick snowplow turns. Until I get to a pretty steep stretch. I fall on my side as I can't quite control my speed well enough and I skid down the steep bit on my hip. A giant lightbulb turns on! It is much faster and safer for me to glissade down the steep bits on my hip than to try to make huge slow switchbacks. So I snow plow a bit, more straight down the slope now that I have a strategy. When I get out of control, I bail onto my side and head straight down the slope on my hip.


While this is a pretty good strategy for me, it is not fast compared to say, everyone else. Skinner number two blows by me while I am bouncing along the slope on my hip. I get up and try to do better, but am stymied by a last steep bit before making a turn onto the jeep road. I slide down on my ass the last few feet to the turn while skinner number three executes a gigantic tele-turn at high speed onto the jeep road. Whooooosh. And he is gone.

I get on the jeep road and go as fast as my frail nerves let me. As I am scrubbing way too much speed, skinner number 4 blows by me in a full tuck. Dammit. I need to point out that skinner 4 was wearing a big ski helmet. Which must have been brutal going up the hill. Well done!

There were nice little pajarito mountain logo shirts, mugs, and stickers for prizes. I finished 8th overall, but 6th in the competitive mens 30-45 age group. They were nice enough to give me a sticker for my efforts. The race entry was a big zero dollars so that was nice. Note that JohnB won both this race and the Chama Chile Classic this year. I think that means he won the NM cup convincingly. Well done John.

So overall it was pretty cool. The top two skaters won by a clear margin, I think they were always ahead of skinners, but from 3-8, we traded places on the mountain a bit, which was pretty exciting for a race with 15 odd people in it. The course was well designed and the shortcuts were pretty fair for both the skinners and skaters.

Big thanks to the organizers whose names I never caught. I know there are a ton of skinners in santa fe and taos who should come out for this next year. There are a bunch of skaters in town who should dow it as well. Good race. Suprisingly fast, really hard, and very fun. I lost 6 minutes on the downhill to skinner1. I think I probably could cut this down a bit next year and maybe go a bit faster uphill if I practiced that every now and again. We shall see. If there were alot more skiers it would be that much more fun so come out next year.
Posted by Tarik Saleh at 12:58 AM

Thanks for the clarification, I will update it!

I woke up too late as well, but I wimped out on doing it. Thanks for an entertaining account!