We had the second race today: 10km classic for me. The weather was turning interesting already yesterday, and it forced me to do more ski and wax testing than ever. It was misty, occasionally raining, occasionally snowing a bit. Temperature at +2.5C with gray clouds hanging over everything, and typically to here the temperatures or anything in the weather did not change at all overnight. So, I woke up really early and went to test glisters on the race course before the first start. My glide waxing was pretty much the best I can get with what I have for this weather, and I chose to use the skis for wet conditions. When testing the wax my glister was freezing on the track, which had been drying out slightly with the wind over night. So, I opted to put a really thin layer of glister on the race skis and cover it with the softest hard wax I had, and ice on the wax really kills the glide. The man-made snow also looked like if it could get mushy and pulverized by the male skiers that would start before us, so avoiding too soft and thick glister felt like the best option. That done, we started walking to the warm-up and race area as my start was already 9:40am. By the time I arrived on the testing track, everything had soaked with more rain so that I basically had no kick on my race skis. The only option I had with me was adding the soft hard wax, and that did the trick. I had an alright glide and decent kick on the test track. Even in the start area I tried how the kick felt, and it was alright, maybe not the best, but still sticking on the surface.

The race start went a lot better than the previous start two days ago. I had somewhat comparable glide to the others and could easily follow the leaders on 4th position out of the stadium. Keeping up with them did not even feel hard, but in the first slight downhill it was obvious that I still could improve the glide of my skis a bit. Then in the first up-hill the name of the game was revealed. I had absolutely no kick anymore, and two more ladies passed me. So, my only option was to herringbone-run between the tracks to get any traction. Luckily, the others did not pull away tremendously fast, and I could see them ahead until the longest gradual climb. But my only option was to double-pole like crazy until I could not anymore and then run up all the hills in between the tracks. Luckily, we have been training running with Lynn the whole summer, and I could do that easily and graciously at every hill, even if it was slower than a nice kick-and-glide. The snow was changing really fast during the race too. By the time I was on the lake section (middle of the course), the track there was completely slushy and I had to double-pole between the tracks to get any glide, and the suction started to eat up the glide also on the tracks of the steepest and longest downhill. On top of the tallest hill there was a ice-water seep bursting brown water on top of the tracks making the trail brown slush. So, there will be a lot of ski cleaning to be done today and tomorrow. 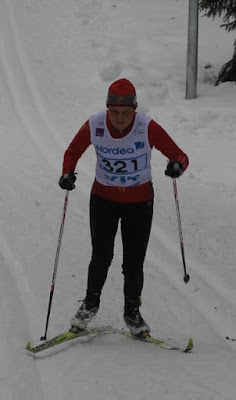 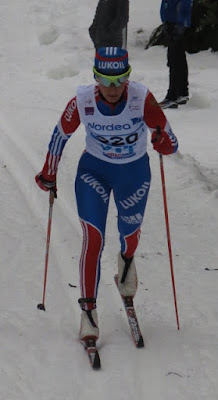 I think I placed 6th, but not awfully far behind the group fighting for the 3rd place. The winner was very far ahead, but I think with better kick wax I probably could have stayed with the others, which is most encouraging. It looks like that if I get the skis working better I could be competitive with the crowds in my age group. The weather forecast is for this moist, warm weather to hang around until Friday evening, which means that the conditions will be like today for all my remaining races. For the glide I can’t do much as I used all the tricks I have already, but I can improve the kick, and will try to get that for the 30km race on Thursday. Tomorrow is a rest day and then the relay on Wednesday, where I hope to get a leg to ski too.

Here attached one photo of the start that went a lot better, a photo of the winner in the last uphill (see the nice technique), and me at the same spot, which tells it all…

Thanks, Sanna
Posted by Dinka at 3:33 PM