As promised, there is now a classic track, of sorts, on the upper trails from Point C up to the meadow. It's a bit bumpy, shallow, wavy, not straight, thin, etc., but there are some nice sections in it. It'll be interesting to see how it skis. We had two full days of skating, so it's time to get some striding in. Skating is still permitted, we guess....

The track had to weave and wind all through the trail, so it will no doubt get skated over in many places. Skiing is a little rough around the edges for both skate and classic, but it has been groomed for both. 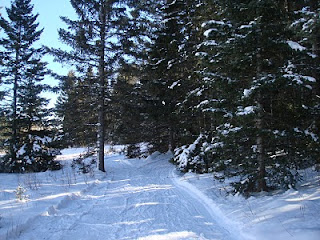 Dina and I spent some time cutting out aspen shoots in the meadow, but there are a lot more to be cut from Point J to the top. Consider cutting some out when you ski (bring loppers). Also did some shoveling around "The Rock," so that should hold for a few more days. Could use more, though. 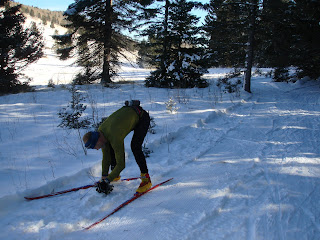 Things skied pretty nicely, if not a bit bumpy and uneven. Some bare patches from the front hill to Point B (upper trails) and to Point R (lower road), but nice beyond that. Some stretches were just great. 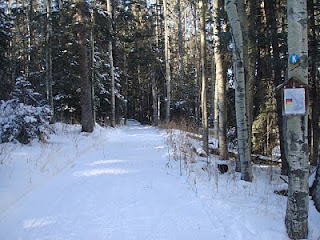