Well, the turnout has been light for the SWNSC trail work thus far, but things are still moving forward.  The club did get a new "trail cutter" brush cutting machine that has done a fine job in clearing out the incredible amount of aspen/locust/wild maple/rosehips, etc.  The thing took some assembly, but once put together and configured, Dave and I got it fired up.  He set it up to work on his tractor, which worked very well, but he did break a bolt in the main hitch, so he had to go to plan-B on connecting it.  He got most of the trail system cut, including cutting out the 2-dozen downed trees that were still blocking the lower road and the Point-O to M bypass.  He didn't make it up through that section of lower meadow, which still has a lot of aspen shoots to cut out.  We may have to hit that by hand.  See the new trail cutter in action below.  Click on the photos to make them larger.  Most of the trail system now looks like this!  Compare that to my post back in August of what the trails looked like then.  It's a HUGE difference! 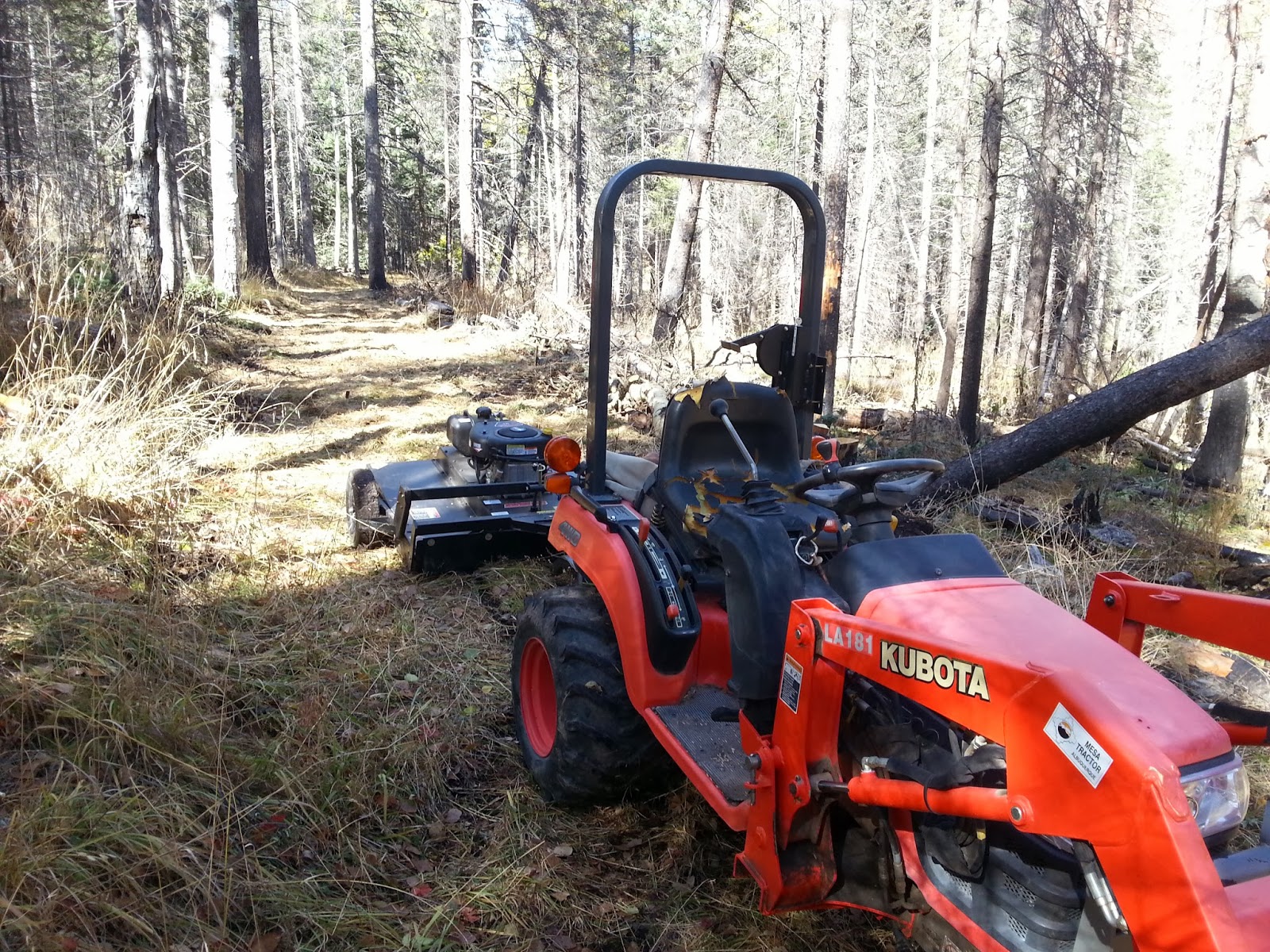 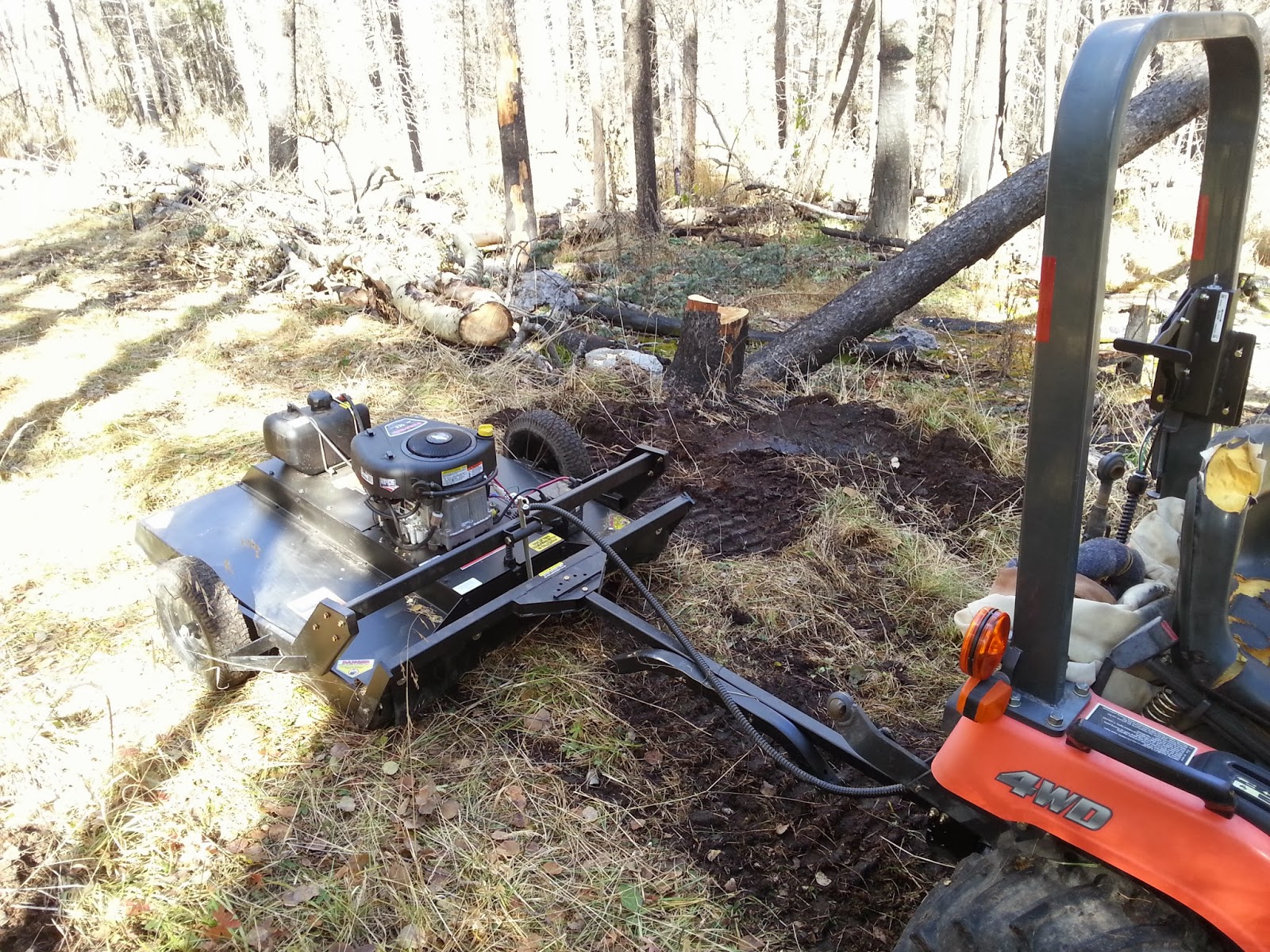 Other areas of the trail still need some mop-up work with the hand brush-cutter where the big trail cutter didn't get (mainly the extreme edges in place, plus around big rocks).  The club also has a new Poulan hand brush-cutter, which we also got fired up and running yesterday.  I hit the zone from the trail head, out to where I was working on the burned ground grading problems on TJ's.

There were almost 50 trees down blocking the trails in various areas where the fire really burned hot and actually burned all the organic material in the ground, especially around the roots of the burned trees.  This has made the situation unstable for the bigger, top-heavy trees.  One problem is that when one comes down, they peel up the ground and the roots of the other trees around them, causing several to fall at once (see my last trail work blog post for some pics).

Another problem we had was where the ground burned at the lower edge of the trail.  There is an obvious strip along that north-facing hillside where the trail traverses several times where the fire burned the ground.  One of the worst areas affected was TJ's trail.  The edge of the trail was either burned away altogether, or had big craters or burned out ditch lines where a root burned, or had slumped away from the lack of vegetation keeping the ground from "oozing" after big precip events.  At any rate, the trail was not in great shape and needed some work.

As part of an agreement and assessment with the Forest Service, the SWNSC is able to go in and fix these areas using mechanized equipment.  This must be done after the temperatures are consistently below freezing, so that the Jemez Salamander has had time to burrow in for the winter.  We started the process of fixing the trail shape and improving the grading last year, focusing primarily on those areas of the front hill and from Point A out to the end of the severe burn (near Point C).  Now, we're going in and fixing these stretches on the upper trails that suffered this ground burn.  We worked on TJ's this past weekend, and I think it was a success.  Below are some pics of the work and a little bit of how it looked afterward.  I wish I had taken some "before" pics to compare, but it would be hard to tell unless you were able to see it in person.  If you get a chance, go see the "new" trail.  It is quite a bit different now!  There are so many grass roots, that in a year or two, we won't be able to tell that anything was done.  I will also do some reseeding work later.  Here are some random pictures.  It's best to go see it for yourself: 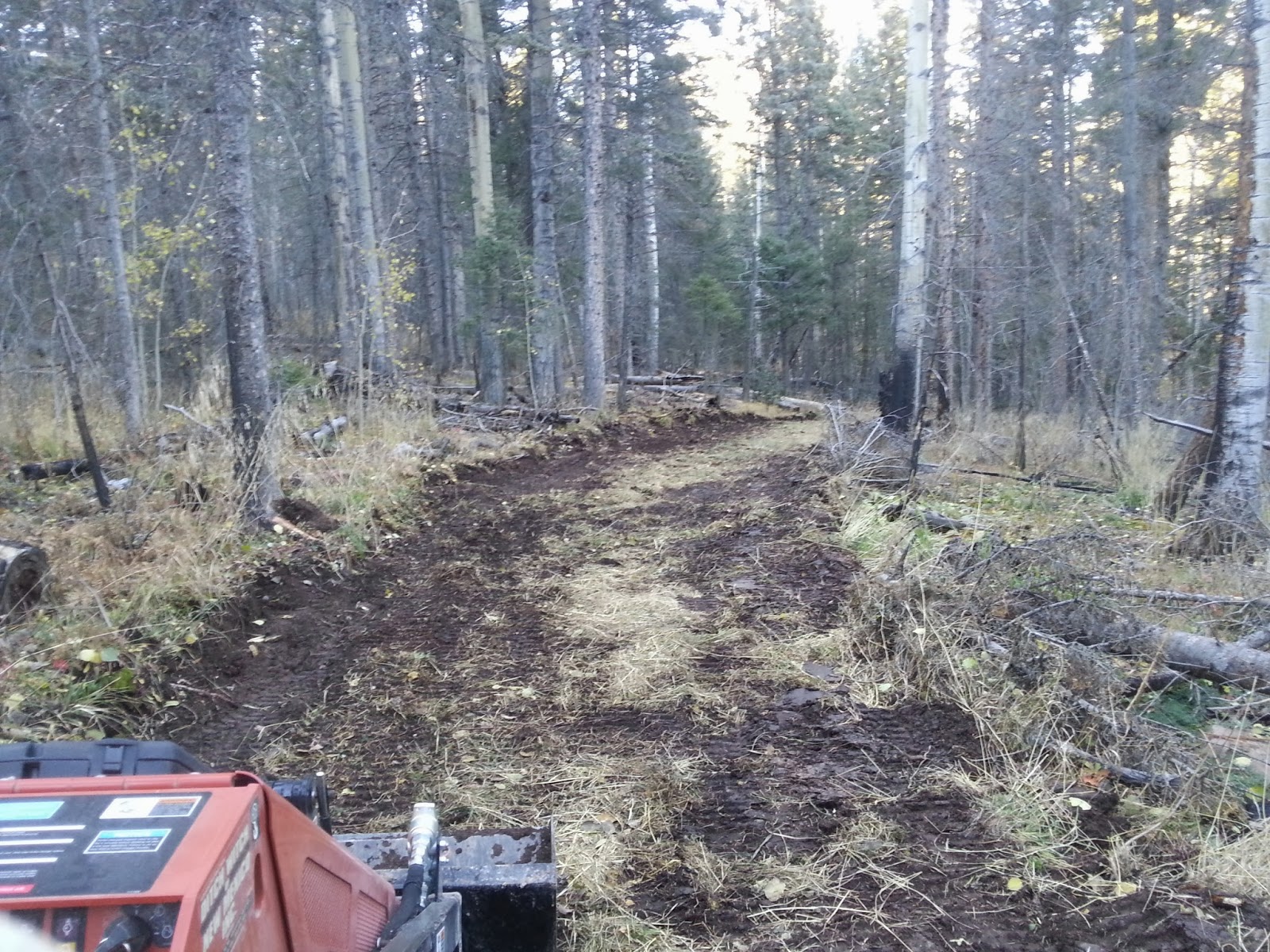 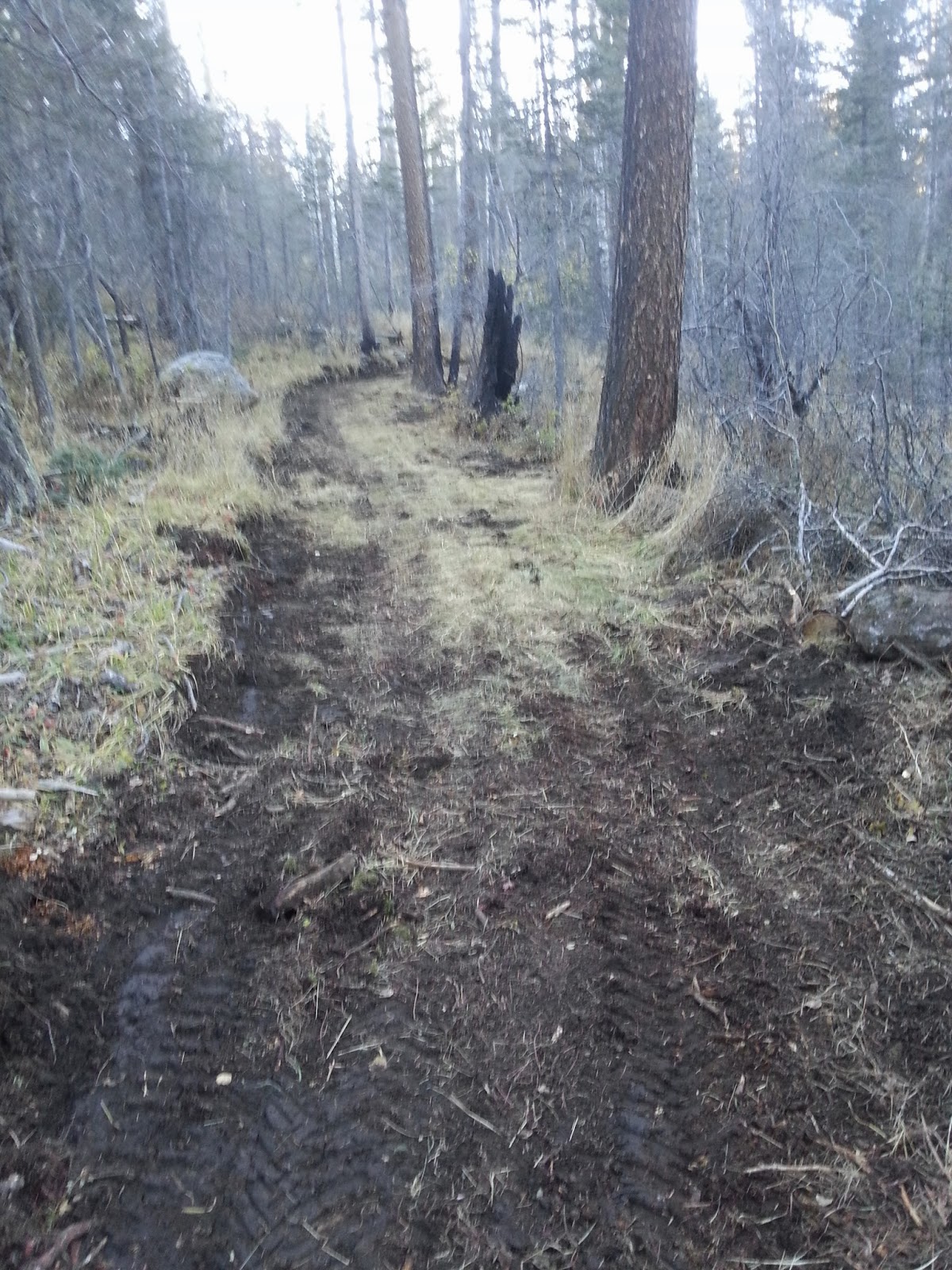 You can see that a lot has been done and hopefully will make things nicer both in winter and summer.  There are still some "big ticket" items that we need help with.  Below is the list in order of priority:

1. Hange the fence!
2. Cut aspen/locust shoots
3. Chainsaw out the remnants of old stumps still sitting in the trail (contact me about this)
4. Finish the inside walls of the equipment garage (we have a bad rodent problem =P  )

We hauled a lot of fencing up to Point A so that folks can start hanging it at their convenience.  I also dropped some off at the lower edge of the fencing that was never taken down last spring so that the project can begin there.  We have LOTs of ties in the shed.

We'll get the rest of the fencing hauled out into position as it goes up.  PLEASE help with this project if you can.  It might be best to have an organized day with a leader/organizer.  I am pretty swamped with a lot of things going on, so I'm hoping someone might take this project on.