It has snowed more in April than I think it did in all of January and February combined. Late March wasn't so bad either.

We finally got out in one of these spring snowstorms to check out the skiing. In the past, I would go up pretty easily by myself when it did this, but with the new addition to the family, it's not quite as easy as it used to be. This time, the family came along, despite the daunting weather conditions. It was a lot of fun. 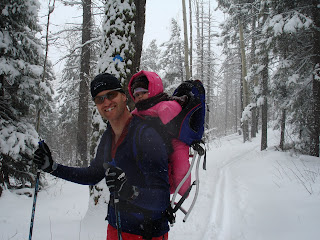 At the Coat Tree (point B). Mila's just about to fall asleep!


There was anywhere from about 12" to 16" of new snow on the trails, depending on where you measured. The upper parts of the trail had the most, of course. We never hit a single thing with our skis, but did feel the rocks below while skiing up the front hill. Once we were a little ways past the coat tree, we could feel the old snow base underneath...pretty solidly frozen. It would have actually been groomable, but the heck with that! 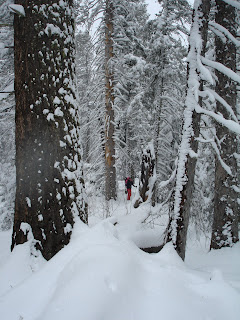 I'm one "switchback" above Dina, who is just past point J.

You can see that the fencing is down at point A (the banner is still up and looking good), and other sections of fencing were pulled down by the heavy snow. I saw no evidence of wands or bamboo poles in the meadow. It'll be a while before we see those again. We saw only a couple of medium-ish aspens down by the bonfire meadow, by the upper shortcut. 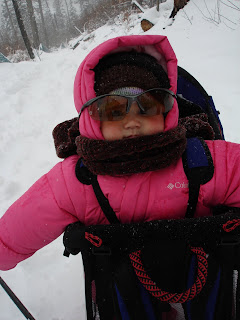 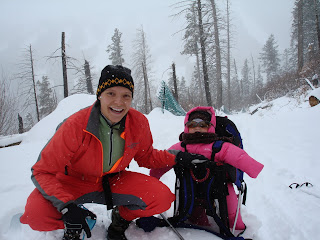 Mila and Dina at point A...you can barely see the ski area in the background. Note the fencing is all pulled down.

Here are just a few more pics of our outing: 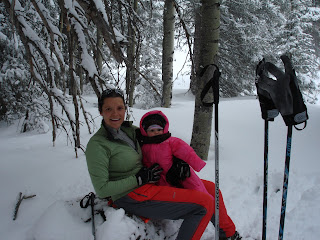 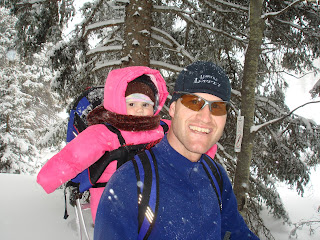 up near point L...we had to stop for a break and since Mila didn't have eye protection,
we didn't take her out into the meadow 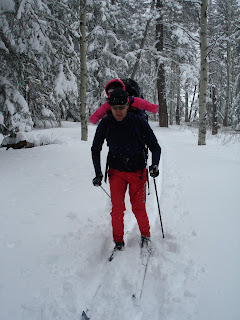 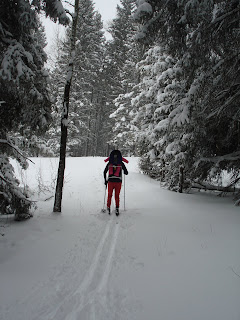 Mila made a good ski companion 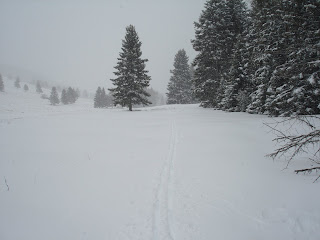 I skied the trail @ 11:00 am this morning just as the latest storm was moving in. It was skiing/side stepping from the Coat Tree to pt J. I then did an out and back on the upper loops and was able to ski that portion continuously. The slopes should be great early tomorrow morning and the trail could be good too.
Mike Engelhardt-aka resident die hard skier.